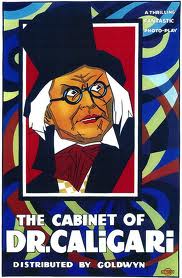 The first of our Halloween screenings is going to be the The Cabinet of Dr Caligari/Das Kabinet des Dr Caligari with live Wurlitzer cinema organ accompaniment.

It will screen on Sunday 16 October at Pollokshaws Burgh Hall.

The film will start at 8pm, doors at 7pm.  Tickets are £5 (£6 on the door) and are available in advance, on the night and also online from Tickets Scotland (search by date or for Southside Film, with £1 booking fee).

Synopsis: At a fair, Alan and his fiancée Jane meet Dr. Caligari and his somnambulist, Cesare, who can predict the future. Cesare reveals to Alan that he only has until dawn to live. This prediction proves true when Alan is murdered. Cesare becomes the prime suspect and then abducts Jane before dying himself. Dr. Caligari retreats to a mental asylum, where his truth is revealed.