Set on the fictitious Scottish island of “Summerisle”, The Wicker Man follows Edward Woodward as the pious police Sergeant Howie, visiting from the mainland to investigate the disappearance of a local girl. To Howie’s shock, he discovers the local population, who still observe ancient Pagan rites and rituals, are unwilling to assist in his investigation, and instead deny the missing girl’s very existent. 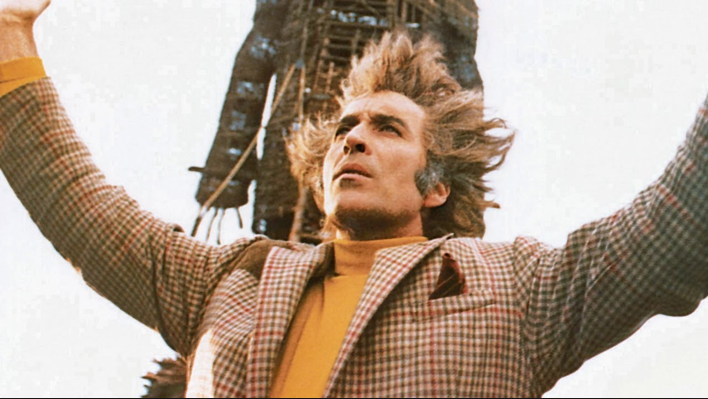 Howie’s disgust grows as he witnesses more and more of the strange attitude and behaviour of the residents, from frog-eating children, to naked dancing around standing stones, and to fire worship. His faith and vow of abstinence is tested by the temptation of Britt Ekland, in one scene found undulating against her bedroom wall in the nude. Beautifully played by Woodward, we see Howie’s moral stance against their unchristian practices grows into an intense hatred. His mistrust and suspicion intensifies as he observes the under-stated subservience of the population to the eccentric but charming Lord Summerisle (a titanic performance by recently deceased horror icon, Christopher Lee), and Howie feels a desperate need to solve this mystery with an increasing sense of urgency as the island preparations for the upcoming May Day festival menacingly loom.

The film is chilling, not only in the bold imagery (for example, the ritualistic donning of dead-eyed animal masks) but also in the tension of Anthony Schaffer’s screenplay, which so convincingly portrays this secret world. The audience, like Howie, is plunged into this mysterious community and is given no surety with which to understand or predict what might come next, nor what depths of depravity are already occurring out of sight.

What finally does occur is surely one of the most terrifying and memorable climaxes in cinematic history…but I won’t spoil it.

Robin Hardy’s 1973 The Wicker Man is a bona fide classic of the horror/suspense genre. Largely ignored in on its initial release due to studio edits and a limited screenings, it has gathered a growing “cult” following and inspired an annual Scottish alternative music festival (not to mention spawning the infamous 2006 remake starring Nicholas Cage, which singlehandedly redefined human and bee interaction for the screen). I for one would love to see this eerie Scottish classic on the big screen, vote for The Wicker Man in the Southside Film Festival Local Pick….”You’ve got to keep your appointment with The Wicker Man.”

Watch the trailer for The Wicker man here: