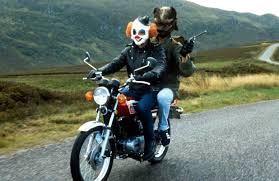 Dr. Moreau: The natives, they have a curious ceremony. Mr. Parker has witnessed it.

Ruth Thomas: Tell us about it, Edward.

Dr. Moreau: They are restless tonight.

A restless native is a peculiar character, a trope left behind from the days of 19th century colonialism, he is typically accompanied by tribal drumming, shamanistic chanting, and highly suspect, irrational behaviours. A year after the referendum, it is perhaps clearer than ever that this colonial subject isn’t just restricted to ‘deepest, darkest Africa’, he might also don a kilt and drink Tennent’s.

The two protagonists of Michael Hoffman’s 1985 comedy, like their African predecessors written in the imagination of khaki-clad missionaries, wear scary masks and terrorise invading tourists. Modern highwaymen, they capture the (American) enemy, and in doing so capture local favour – as an angry young Scot, it’s hard not to savour the blundering oppressor’s comeuppance. Restless Natives mines the rage of any local who has tried to navigate the Royal Mile during Fringe season.

Ronnie and Will live in Scotland: The Socialist Utopia, where their conscience pangs more for wasting the taxpayer’s hard earned keep than for the robbery of innocent tourists: its Rob Roy meets Robin Hood set against the backdrop of high Thatcherism and the rolling Munros of the Highlands.

Released in the same year as The Breakfast Club and The Goonies, Restless Natives is a sharp comedy that finds itself commenting on the discontent of the Scottish youth in sharp relief against the starry-eyed American cinema of the time. Somewhere in between Gregory’s Girl and In Bruges, Hoffman’s film is a touching black comedy that celebrates Scottish adolescence, warts and all.