Jonathan Glazer’s third film, Under the Skin, follows Scarlett Johansson as an unearthly creature disguised as nameless woman who prowls the streets of Glasgow, luring male victims into her lair to be swallowed into pools of black viscous matter. The film opens with a Kubrickian composition of creation: a pinhole of light that expands into a celestial and planetary crescendo, before transforming into an eye, blinking and seeing for the first time. Perception is rendered critical here, and Glazer works to create a film that foregrounds a strikingly unemotional gaze. 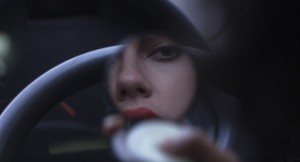 The film strips the plot of Michel Faber’s debut novel back to an almost wordless dance between Johansson’s stalking predator and her unwitting victims. It is dominated by silences that render the scenes otherworldly to the viewer, and Johansson and her motorbike riding minder seem to communicate without language. At the inception of Johansson’s human form in the opening scene, we hear her finding her voice through repeated nasal articulations. Glazer is careful to ensure she is not invested with a kind of infant-like curiosity here, but rather voices as if testing an instrument. When Johansson does speak in her clipped yet regionless English accent, her voice is as much an alien presence in the buzz of the thick Glaswegian dialect as is her physicality. She coyly asks her victims, ‘Do you think I’m pretty?’ and the answer is always fatally affirmative.

Under the Skin plays with the incongruity of Johansson as sex symbol and movie star suddenly hanging around Sauchiehall Street at night, and uses this consciously to construct an unsentimental strangeness. It is bleak and bold in its treatment of the frame as an objective lens, the emotionless eye of Johansson as dangerous seductress. It is through this detachment that the film achieves it goal of creating a world that is acutely depersonalized. My own reaction after viewing the film in the cinema was one of environmental bewilderment; on the walk home, everything that had seemed commonplace was suddenly transmogrified into oddity.

This evisceration of the familiar is bolstered and cemented by Johansson’s remarkable performance. She is supremely blank – all surface, and reactive only in minutia, a dearth where her personality should be. When coupled with the astonishing and haunting score composed by Mica Levi who uses violins to conjure up and cloak the film in an unsettling and eerie tonal shroud, Johansson has never seemed more conflictingly malevolent yet vulnerable.

The scenes in which Johansson ensnares her victims in her lair, silently siren-like with her nude body, become as reverse-births, the men floating in suspended animation in a kind of amniotic fluid that destroys rather than creates. Amongst this complex thematic framework, the film balances the juxtaposition of the fantastic with the mundane. When placed alongside each other, the two generic and tonal aspects of the film – social realism vs. futuristic science fiction – initially seem incompatible. But instead the contrast works with startling success by having the effect of amplifying one another.

While much of the film’s first half is concerned with this cycle of hunt-lure-kill, as it moves forward we realize at its heart it is about the acquisition of empathy. We gradually witness Johansson’s character begin to develop morality, and an encounter with a man suffering from neurofibromatosis catalyses her into an existential crisis as she is confronted with an urge to be benevolent.   Much like Birth, Glazer’s misunderstood 2004 sophomoric effort, Under the Skin is a film that attempts to bridge the gap between big ontological and philosophical questions about the nature of existence and the definition of humanity, and as Johansson replaces the urban grit for bleak moors and forests, the film dares to ask at what point does a person become human.

Since it premiered in 2013, and as the buzz around it has increased and abated over the past few years, it has drawn its fair share of detractors as well as admirers. I think part of Under the Skin’s divisiveness lies somewhere in its attempt to broach these broad questions of what defines a human through a scheme of juxtaposing the familiar with the uncanny. Glazer doesn’t create a cinematic space that attempts to answer these questions for the viewer, but rather purposely removes explanation from all aspects (this includes denying the comfort of a clearly stated motivation for Johansson’s culling of lusty men). This is a film that is fundamentally about atmosphere, and Glazer invokes highland mist and deserted high-rises as visual metaphors for the film’s interest in obscurity and uncertainty. Definitely, Under the Skin resists ease, but it will simultaneously draw you in to its erotic and murky blackness.

Watch the trailer for this film here: