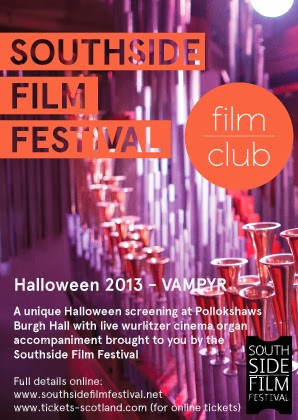 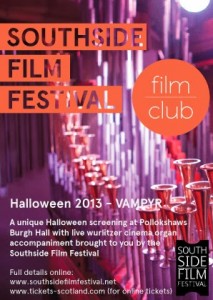 On Sunday 27 October we are delighted to be screening screening Carl Th. Dreyer’s Vampyr with live Wurlitzer Cinema Organ as part of our Autumn Film Club in partnership with Pollokshaws Burgh Hall and the Scottish Cinema Organ Trust.

The film will start at 8pm, doors at 7:30pm. Tickets are £6 (£5 for concessions) and are available online from Tickets Scotland (booking fee applies) or on the door from Pollokshaws Burgh Hall.

Synopsis: Young traveller Allan Grey arrives in a remote castle and starts seeing weird, inexplicable sights (a man whose shadow has a life of its own, a mysterious scythe-bearing figure tolling a bell, a terrifying dream of his own burial). Things come to a head when one of the daughters of the lord of the castle succumbs to anaemia – or is it something more sinister?