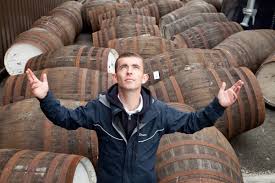 One of Ken Loach’s most recent films, The Angels’ Share offers great one-liners with a biting hit of reality. We follow the protagonist Robbie as he tries to stay on the right side of the tracks for the sake of his partner and newborn son. He finds himself attempting to avoid old enemies, before falling in with a bunch of fairly harmless miscreants to pull off a daring and slightly ridiculous heist.

I was enchanted by The Angels’ Share from the first watch, even from the opening scene. In one of the most memorable, and certainly one of my favourite openings to a film, a drunkard in a tracksuit with a bottle of Buckie stumbles around on the railway tracks, with the stationmaster agitating over the tannoy, trying to get him out of the way of the train. This introduces the first of the unlikely group of leads in this adventurous romp.

They all meet doing community service for their various crimes, and when rewarded by their supervisor, Harry, with a trip to a distillery, they are inspired to hatch a plan to steal a rare, expensive whisky. It feels cheap, too obvious, to compare it to The Full Monty, but this is an underdog tale in the same vein but much wittier and sharper, set to a background of on-going Glaswegian family feuds. It balances humour, reality and poignancy very well, with a bit of adventure too. It’s not all plain sailing as they set off for the highlands, four Glaswegians camping out for their whisky, and hatching plans to break in with shamefaced innocence and blagging; but you are desperately keen for them to succeed.

There’s no sugar-coating either from Loach in his representation of the violent and difficult world in which the group live. Robbie meets a young man he’d assaulted, the crime for which he is serving his community service, and we see in painful detail his violence and him trying to come to terms with his actions and their after-effects.

The whisky talk is good too; I’m a very ignorant whisky lover, and felt at home watching the group sampling the miniatures stolen from the distillery (“You smell the peat?” “Who the fuck is Pete?”). Robbie is discovered to have a good nose for whisky and thus everything starts to fall into place for him and his young family. The film celebrates aspects of Scotland, with beautiful rolling landscapes, good whisky, kilt jokes, filthy humour, but avoids being too saccharine with its naturalistic dialogue (many of the leads are non-professional actors) and the real struggle of Robbie to keep free of what seems to be an inevitable life of crime. Yeah, it closes with 500 Miles too.

I’m not Glaswegian, but have adopted the city as mine and am filled with unabashed joy for Scotland when I watch this film. The title comes from the so-named minute portion of whisky that evaporates in the cask. I like the Robin Hood feel to the film; they take their Angels’ Share. You can’t condemn them as criminals, just fans after a little adventure who take their part fair and square, and reward those who helped them along their way. It’s one of those films where you really, really, want to read that it is based on a true story. Alas no.

Trip to a distillery with some empty Irn Bru bottles, anyone?