Orphaned and alone except for an uncle, Hugo Cabret lives in the walls of a train station in 1930s Paris. Hugo’s job is to oil and maintain the station’s clocks, but to him, his most important task is to protect a broken automaton and notebook left to him by his late father. Accompanied by the god-daughter of an embittered toy merchant, Hugo embarks on a quest to solve the mystery of the automaton and find a place he can call home.

Commercial picture houses were not the only places where Scots encountered films during the early cinema period. The Scottish Co-operative Wholesale Society (SCWS) had its central offices and some manufacturing halls in Morrison Street – just south of the river Clyde – and had a cinema.

This talk by Julia Bohlmann, Early Cinema Researcher at the University of Glasgow , will sketch out three different roles cinema played for the SCWS and its members between 1902 and 1928, and treat the audience to two of the first films the Society itself commissioned during the 1920s – Making Soap (c.1928) and How Guild Margarine is Made (c.1928). 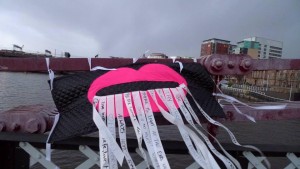 Gallery of Modern Art Glasgow (GOMA) have invited The Women’s Unit to create a new experimental moving image work for Southside Film Festival. Founded by artist Mandy McIntosh in 2015 in Castlemilk, The Women’s Unit is a free feminist art space for women who have faced male violence and abuse. The Women’s Unit was born out of a year-long artist residency McIntosh had with Glasgow Women’s Library, which considered the legacy of the Zero Tolerance campaign in 1994.

For the Festival, women at the Unit will work with McIntosh in puppetry performance and sound manipulation to make a new piece of cinema. This new film will be screened alongside previous films by McIntosh which address abuses of power and control. Women from the Unit will be present to discuss their work.

Transit is a nomadic programme of artists’ film screenings produced by Marcus Jack. Episode 2: The Lens is a Lyric, in partnership with Southside Film Festival, will screen in a van outside Govanhill Baths. In this episode, films by Jen Martin, Chris Bowman and Andy Mackinnon have been collected to reframe the film as a visual poem. At the seat of industrial decline, more space is being made for creative industries; these three films adopt poetic techniques to trace changing rhythms across the self, the city and further afield.

Making in the Movies
Govanhill Baths
10.30am – 6pm
Suitable for all
FREE

A festival first, in partnership with Rags to Riches, Sew La Tea Dough, Glasgow Craftivists and Govanhill Baths: join us for an afternoon focused on fashion, craft, making and style – past and present, local and global – with workshops, film screenings and a craft market.

Learn how to repair, re-use, recreate, revamp and restyle clothing and other domestic fabrics.

Pick up unique upcycled products handcrafted by local makers at this mini version of the popular Rags to Riches market. This will be a flavour of what is in store at Rags to Riches events in November.

Engage in a spot of Craftivism with Glasgow Craftivists, who use craft and creativity to reflect on issues, express views & link in with wider political movements. 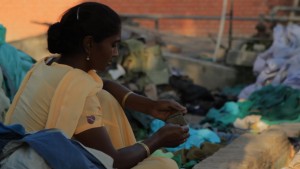 Unravel follows the Western world’s unwanted clothes, on a journey across North India, from sea, to industrial interior, to Panipat; a sleepy town and the only place in the world that wants them, for recycling back into yarn. With limited exposure to Western culture, the factory workers construct a picture of how the West is, and who wore the cast-off clothes. 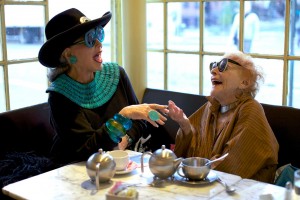 Advanced Style examines the lives of seven unique New Yorkers whose eclectic personal style and vital spirit have guided their approach to ageing. This film paints intimate and colourful portraits of independent, stylish women aged 62 to 95 who are challenging conventional ideas about beauty and ageing.

There will also be an opportunity to see craft and textile themed films Birth of a Sewing Machine, Textiles, and Weave Me a Rainbow from the Scottish Screen Archive throughout the afternoon. Full details to come.

United We Will Swim… Again tells the extraordinary story of how a community fought to save their local swimming pool, bringing it back to life after it was closed by Glasgow City Council. This is one of Glasgow’s famous political stories and it is brought to life in this inspiring documentary, with original footage from the protests and interviews with the key activists involved. With an introduction and Q&A with filmmaker Fran Higson.

This is a Camcorder Guerrillas film made by Fran Higson with the aim of supporting Govanhill Baths get water back into their pools. 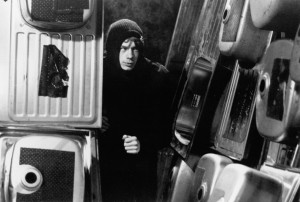 The hilarious directorial debut of acclaimed director Bill Forsyth (Gregory’s Girl, Local Hero). Unemployed teenager Ronnie (Robert Buchanan in Gregory’s Girl) and his hapless pals spend their time hanging around the rainy parks and dingy cafes of Glasgow, but their world is about to change when Ronnie hatches a plan to make them all rich, by stealing a job-lot of stainless-steel sinks. Hilarious and inventive, Forsyth’s zero budget debut provides an authentic depiction of 1970s Glasgow youth culture.

Introduction and Q&A with the film’s Associate Producer Paddy Higson and some of the original cast.